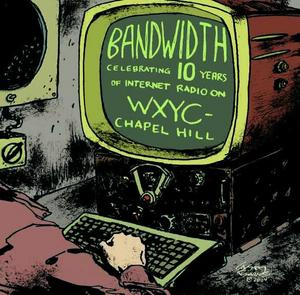 In honor of the occasion, we invite you to download our free commemorative anniversary compilation, Bandwidth: Celebrating 25 Years of Internet Radio on WXYC-Chapel Hill. It is available in its entirety as a torrent, or you can download the mp3 files individually.

In honor of the occasion, we invite you to download our free commemorative anniversary compilation, Bandwidth: Celebrating 25 Years of Internet Radio on WXYC-Chapel Hill. It is available in its entirety as a torrent, or you can download the mp3 files individually.

On November 7th, 2004, we had an interesting panel discussion with some of the folks who helped get our webcast going back in 1994. Topics ranged from the early days of audio streaming to more modern subjects such as podcasting and Internet2. The discussion was broadcast over our airwaves (and of course simulcast over the ‘net), but if you missed it you can listen to this MP3 recording.

Or read on below for more info about the original 1994 simulcast.

WXYC began simulcasting its off-air signal in the fall of 1994, using the Cu-SeeMe utility developed at Cornell University. We went official on November 7, 1994, becoming the first radio station in the world to offer a live Internet simulcast of an off-air signal. In 1995 we upgraded to a Streamworks encoder/server setup with support from Xing Technologies, broadcasting a 16K signal around the globe.
WXYC on Jeopardy

In the years since then we’ve received correspondence from listeners in Japan, Australia, Puerto Rico, the U.K., Israel, Belgium, Sweden, New Zealand, Malaysia, South Africa, Portugal, Turkey, Russia, Greece, Kuwait, Yugoslavia, Italy, Germany, Brazil and many others. You can take a look at a log report (October 1998 – September 2003) from our in-house 16k server.

Shouts out to Mike Shoffner and David McConville for providing mental feats, technical support and sweat equity in getting the original simulcast up and running. They initiated the project in a discussion with WXYC management on August 18, 1994 and testing began soon afterward, using an FM tuner at SunSite to feed the audio signal into a machine running Cu-SeeMe.

Other radio stations have also claimed to be the “first on the Internet” — however WXYC feels that research bears out our right to the title. KJHK at The University of Kansas has made the claim, but the university’s own documentation indicates that KJHK began its Internet broadcast on Dec. 3, 1994, almost a month after WXYC.

WREK at Georgia Tech connected to its first Internet client on Nov. 7, 1994, the same day WXYC went official with its Internet broadcast. By WREK’s own admission, they did not go official until several months later.

The original press release can be found here and in usenet archives.

The Golden Days of (Internet) Radio by Michael Shoffner, November 2, 1994.

Walking a Thin Line: Is There a Safety.Net for Internet Retransmitters of Off-Air Radio? by David McConville, spring semester 1995. [PDF 62K]

Some of the early press attention was a little confused, or hostile, or both… “I certainly hope this is NOT the start of a trend.”

Hobbes’ Internet Timeline cites WXYC as one of the first stations to “start rockin’ (rebroadcasting) round the clock on the Net” in 1994.

This Gavin article from September 13, 1996 cites WXYC as the first:

On November 7, 1994, WXYC/FM-Chapel Hill, N.C. became the first radio station to simulcast 24-hour programming on the air and on the global computer network. The college station viewed it as an experiment and an indication of what the Internet could be.

UPDATE: Save Our Streams — The latest update on the copyright fees and restrictions affecting non-commercial and educational Webcasters.

UPDATE: As the image above demonstrates, WXYC made an appearance on the TV game show Jeopardy on April 20, 2004. “It’s believed that in 1994 WXYC in Chapel Hill in this state became the first radio station to webcast.” Of course, the answer (phrased in the form of a question!) is “What is North Carolina?”

To listen to live streaming audio of our FM signal, click on the buttons at the top of any page in this site. WXYC is currently webcasting its signal via two different streams: Stereo 128k MP3 and 64k OGG streams.  If you have specific questions about our simulcast, try the help section or contact us.